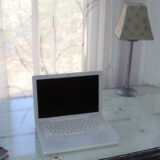 When You Can’t Take It (All) With You: Get Creative!

The simplicity of downsizing sounds good to people from the comfortable nest of familiar belongings. But often when it is time to actually start letting go of things, emotions, doubts and attachments can get in the way. What to do?

One idea that has worked well with many people, is that of “remaking” something large and beloved into a smaller, more efficient  or symbolic version of its former self. An example of this would be a window treatment that we completed for a client who was very attached to a window wall in the home she would be leaving. The expanse of draperies simply had no similar place to hang in the new smaller space to which she was headed.

Knowing the importance of the drapes, we re-made six drapery panels of raw silk into an informal swag and skirt for this client’s home office.  The client’s desk, a vintage door sitting on two file cabinets, was custom-cut to slip into the bay window and dressed with a luscious silk skirt.  The windows were treated with the same fabric from the original silver drapes and  softened with hand-painted sheers.

This re-creation of former possessions made it possible to economize on both space and fabric. The solution pleased her greatly, as the unfamiliar space took on an instant feeling of home.

Tip: Favorite fabrics can be reused for throw pillows, small lap robes, wall hangings, and table runners. A little imagination can mean the difference between a feeling of discarding the past and that of taking it along to add comfort to a new home.

About Design for Change